Averages and clearance up at Seriston

Following a very tough winter and virtually no spring and with a season deteriorating by the day, Anthony Hurst presented his rams in wonderful breeding order last Friday.

Almost entirely paddock reared, the offering of 42 Suffolk rams and 129 White Suffolks was keenly sought after by the many return buyers who know the great performance they consistently get from the Seriston rams.

Richard Smith with his very active agent Leigh Warne of Landmark Naracoorte stepped in early in the White Suffolk section. Buying for RD & MA Smith “Lampshed Farms” Edenhope, Richard selected 11 rams for an average of $1,336 which included Lot 25, the top priced ram at $1700. 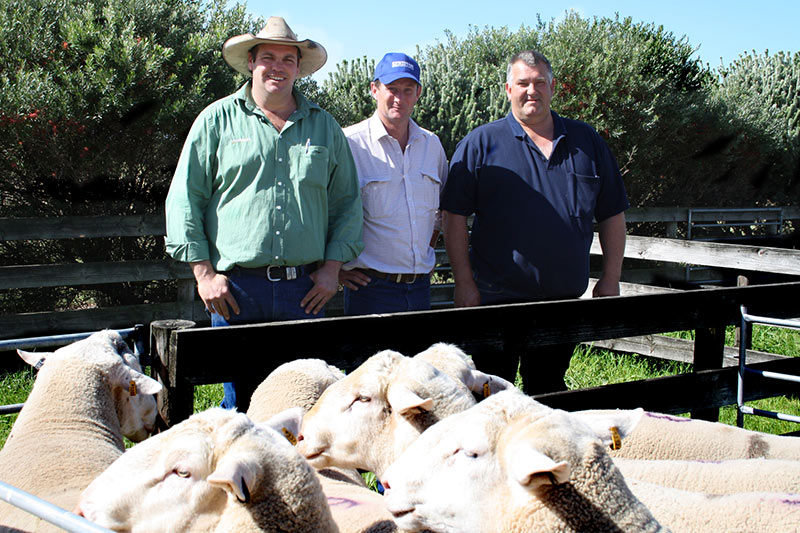 Tecno Grazing from Mt Burr and were after numbers put a wonderful base in the sale, selectively securing 10 White Suffolks in the $500 to $600 range.

Winner of the Coprice sponsors’ prize of $200 and 2 bags of dog food was Jason Elliott, Heathfield Rural who took home 6 head for an average of $875. RA & MJ Jones, Lochaber selected 7 head, as did MS, CC & RB Johnson, Lucindale who purchased 9 head last year.

Geoff Agnew, the manager of the Baker Group of properties from Furner stepped into the sale early and purchased 5 rams to the equal second top price of $1,600, and at an average of $1,260. He also accepted the Gallagher sponsors’ prize of a Fence Energiser on behalf of the Baker Group from the Federal Member for Barker, Tony Pasin.

Speaking after the sale Seriston principal, Anthony Hurst expressed great satisfaction with the result.
“We have had a very adverse season, and to achieve a tremendous clearance of 93% with virtually all our purchasers being return buyers, we’re very happy” he said.

The sale was conducted by Elders and Landmark with Ronnie Dix and Gordon Wood the auctioneers.

Tim Merrett, Chay & Merrett Millicent is pictured making sure he has the correct rams on board after purchasing 10 Suffolk rams for 3 clients at the Seriston ram sale.

Ian “Church” Mason, Elders Lucindale purchased 8 rams at $800 for RA & JA Legoe and is pictured with Peter Tregoweth, Lucindale who purchased 2 rams at an average of $1,175.